The widespread Nashville area communications outage has impacted most of Williamson County 9-1-1 lines and many of the non-emergency numbers used to reach public safety organizations throughout the county.

AT&T customers and others experiencing a cellular outage may be able to utilize their mobile phone to place calls and to send and receive text messages while connected to WiFi. To activate WiFi calling, follow the instructions below:

Franklin Police are seeking information on a case involving a building under construction at 4000 Rush Street. Sometime over this past weekend, someone cut several electrical wires in what appears to have been an attempt to steal copper. The contractor is estimating rewiring and other damage costs at more than $200,000.

This is a busy area near an apartment complex, condominiums, and several businesses, so police are hoping that someone may remember seeing something that could help solve the case. There is a cash reward for information.

Detectives are trying to track down a porch pirate who stole packages from the front porches of two Franklin homes on August 30. Home security cameras captured these images of the suspect and his car. There is a cash reward for information in the case.

The Franklin Police Department is proud to announce that it was awarded its seventh reaccreditation by The Commission on Accreditation for Law Enforcement Agencies.  In October, a team of assessors conducted an in-depth inspection of the Franklin Police Department, examining all aspects of its policies and procedures, management, operations, and support services. Accredited agencies are recognized as having attained professional excellence in public safety.

“The CALEA Accreditation process is the gold standard for law enforcement agencies,” said Deborah Faulkner, Chief of Police.  “It is a tool that promotes community trust, excellent policy development, it promotes transparency and continuous review of police procedures.  We believe the accreditation process makes us the best we can be—our community deserves nothing less than our best.  We are extremely proud of this recognition.”

Franklin Police Detective Darren Barnes, a Williamson County native, began his 27-year career with the City of Franklin in 1992 as a police dispatcher, reserve police officer, and volunteer firefighter. In 1993, Barnes transferred to the Patrol Division as a full-time Franklin Police Officer. During his 15 years on patrol, he served as Field Training Officer, a member of the Department’s Community Oriented Policing Unit and Community Action Team. Barnes also served as a Crisis Negotiator. Soon after his promotion to Detective in 2007, Barnes was assigned to the FBI’s Violent Crime and Gang Task Force, where he investigated serious violent crimes, tracking down dangerous gang members and fugitives. After returning to the Franklin Police Department in 2019, Detective Barnes was assigned to the Criminal Investigation Division, Major Crime Unit.

His distinguished career includes recognitions for excellence in both crime-fighting and community service. Detective Barnes is a three-time recipient of the United States Attorney Award for Excellence in Law Enforcement. In 2007, he received the Hope Award for his role in providing and installing an air conditioner for a Franklin resident in need. Detective Barnes is the Franklin Police Department’s 2014 Detective of the Year.

“Detective Darren Barnes has served the Franklin Police Department for over 27 years with professionalism, pride, dedication, and courage,” said Chief Deborah Faulkner. “He has worked tirelessly to protect our citizens. He has many friends at the FPD and will be greatly missed by all of us.”

Colleagues, friends, and citizens can leave their sentiments and well-wishes for Detective Barnes by posting them in our Leave a Reply field, below.

Police in Franklin are investigating after a woman was attacked and robbed outside a Cool Springs business late Tuesday morning.

At 10:40 am, officers were summoned to 730 Cool Springs Boulevard after the suspect punched and slapped the victim in the parking lot as she was gathering belongings from her car. He stole her purse and then used the victim’s stolen credit cards at nearby stores.

The below is from TBInewsroom.com. 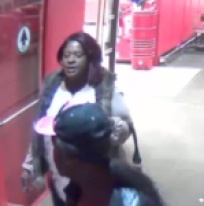 Detectives in Franklin want to identify the four suspects in these surveillance pictures. On December 14, the suspects went into the Target at 1701 Galleria Blvd. in Franklin and stole items valued at $2315.  They were last seen driving away in a dark Chevy Tahoe.

Brian Burns, a 30-year-old Maple Drive resident, died today from injuries he sustained after tragically losing control of his motorcycle when he swerved to miss a deer. Help arrived shortly after 2:30 this morning after a motorist contacted Franklin Police to report seeing Burns’ motorcycle near the ditch on Liberty Pike near Turning Wheel Lane.

Burns was transported to the hospital, where he succumbed to his injuries. Officers do not believe that alcohol was a factor, and are saddened by the family’s tragic loss.