Tonight, many will celebrate the accomplishments of 2018 while waiting in anticipation for the countdown to a new year. Alcohol will be at the center of many New Year’s Eve celebrations tonight. The problem with the drinking many are likely to do is their decision to drive home that follows, and the life-changing moment of impact that can follow one bad decision.

(Lori Webb, the way her mom remembers her)

Let’s go back to 1971. The Webbs were on their way home from Roy’s work where they had gone to pick up some peaches. Roy’s wife, Millie, who was seven months pregnant, was craving them. In a moment, their lives were changed when an impaired driver with a blood alcohol concentration of .08 slammed into them from behind on Murfreesboro Road near I-65. Millie’s neck was broken and she suffered burns over 75% of her body. Roy was severely burned. Their 4-year-old daughter, Lori, and 19-month old nephew, Mitch, were both killed. Little Mitch died six hours after the crash. Lori endured two weeks of treatment for excruciating burns that covered 75% of her body before dying in the hospital. That baby – very awake, and very aware, never got to experience her mother’s touch again before dying a broken little girl. In fact, Lori was buried before Millie was even strong enough to be told that she had died. Millie’s unborn baby, Kara, was born premature and legally blind. Now in her forties, and a mom herself, Kara’s never clearly seen a sunset, a rainbow, or the faces of her own children light up when they score a point at a game.

Millie Webb is not just a former Mothers Against Drunk Driving National President. She’s not just a woman who was instrumental in lowering the legal limit from .10 to .08. She is a friend to the Franklin community, and the matriarch of a ravaged family who helped to start Tennessee’s first Mothers Against Drunk Driving Chapter in 1981. Millie Webb is the mother of a victim. She is the aunt of a victim and wife of a victim. She herself is an unfortunate, life-long victim of the reality of impaired driving.

Fines, bond, attorney fees, and increased insurance premiums are a few of the expenses you can look forward to footing the bill for, if you drink and drive. MSN Money reports that the typical DUI arrest ends up costing about $10k. Today, the average no-frills funeral cost about $8,000. If you get behind the wheel of a car after you’ve been drinking tonight, you may end up with a ride in a police car, or a hearse. Either will cost you, and others – dearly. Don’t believe it could happen to you? Let us introduce you to the Webbs.

An increased number of Franklin Police Officers begin hitting the streets tonight to help protect you through the New Year’s holiday. Officers are working overtime to focus on impaired, distracted, and dangerous drivers. The Tennessee Highway Safety Office is funding that overtime in an effort to help keep motorists in Franklin and throughout Tennessee safe.

Alcohol is sure to be served at many upcoming New Year’s celebrations. If you plan to drink, be sure that a designated driver is part of your plan as well. If you drive impaired – you will be arrested, you will go to jail.

Now through January 11, the Franklin Police Department is seeking qualified, P.O.S.T certified applicants for the position of Police Officer. Under limited supervision, Franklin Police Officers patrol assigned zones while exercising responsibility for the enforcement of state and local laws relating to public safety and welfare. They c 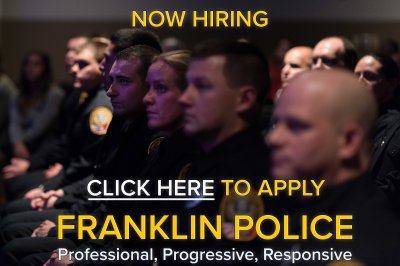 ontrol traffic, prevent crime and disturbances of the peace, and arrest violators. While working under often stressful, high-risk conditions, our officers apply good independent judgment when dealing with dangerous or unusual situations, and implement safe practices and procedures.

Education and Experience:
The required knowledge, skill, and abilities to satisfactorily perform job duties are normally acquired through attainment of an Associate’s degree or equivalent from two-year College or technical school; or six months to one year related experience and/or training; or equivalent combination of education and experience. 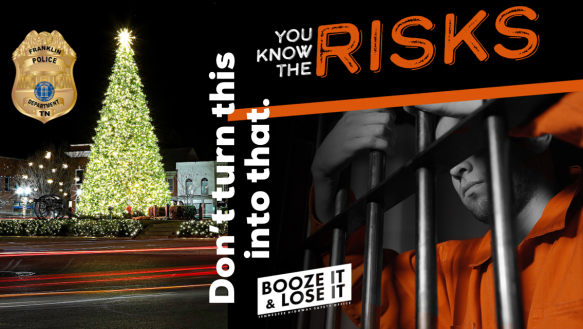 Extra Franklin Police Officers begin hitting the street tonight to help protect you this weekend & throughout the Christmas holiday. Officers will be working overtime to focus on impaired, distracted, and dangerous drivers. The Tennessee Highway Safety Office is funding that overtime in an effort to help keep motorists in Franklin and throughout Tennessee safe.

Alcohol is sure to be served at many of this weekend’s holiday gatherings. If you plan to drink, be sure that a designated driver is part of your plan as well. If you drive impaired – you will be arrested, you will go to jail. 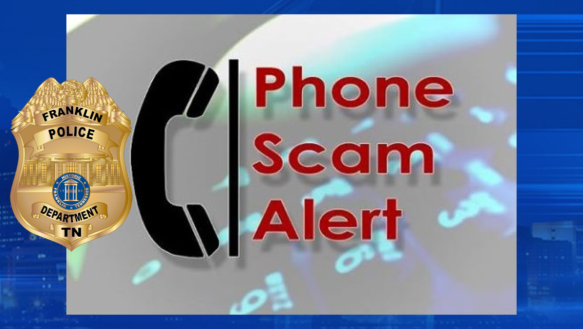 Fraud Alert: Scammers are calling around today, using the Franklin PD’s phone number (615) 794-2513, and alleging that a friend or loved one is in jail and in need of bond money.

THIS IS A SCAM being perpetrated by offenders who
are spoofing our number onto your caller ID.

The FPD will never call you to arrange for bond – NEVER. If you receive one of these calls, don’t give them a dime or your time – HANG UP!

If you have fallen victim, call Franklin Police to speak with an Officer to file a report. 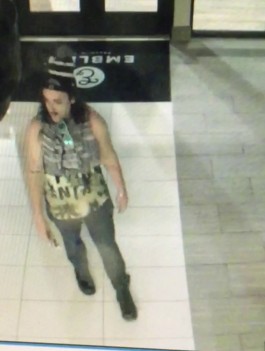 Franklin Police are asking for the public’s help to identify this man, wanted in connection with theft of wallet and unauthorized use of a motor vehicle. On 10/14/18 at 5:05am, this suspect was captured on camera driving the vehicle inside Emblem Apartments in Cool Springs.  If you know who he is, please call (615) 794-2513.

Franklin Police have identified the two remaining suspects who grabbed $4,500 in name-brand clothing from Macy’s on December 7, and then intentionally rammed a Franklin Police car during their getaway.

Crystal Miller, 23, and 24-year-old Asia Crawley are both wanted by Franklin Police on felony charges. Crawley is a convicted felon, currently on probation. Both are wanted for Felony Theft, and Miller is wanted for the additional charge of Felony Evading after being identified as the driver who intentionally rammed a Franklin Police car during the group’s brazen getaway.

Franklin Police and Crime Stoppers are offering a cash reward of up to $1,000 for information that lands these two behind bars. 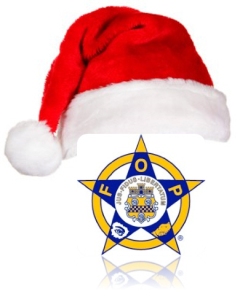 Sunday morning, police officers from across Williamson County will help to make Christmas a little brighter for families who are down on their luck this year.

The Morris Heithcock Fraternal Order of Police Lodge #41 will hold its annual Shop with a Cop event on December 16, at the Franklin Walmart, from 7-9am. 150 children from pre-screened families have been selected to do their Christmas shopping with local police officers who will spend more than $30,000 generously donated by local residents and businesses.

FOP members from the Williamson County Lodge in Franklin look forward to the event every year and say that helping local families is possible only because of the community’s generosity, and an incredibly caring group of men and women who wear the badge.

Media interested in covering this event is approved, by Walmart, to be on the property and inside of the store located at 3600 Mallory Lane, Franklin, TN, Sunday morning.

The suspects intentionally rammed a Franklin Police car during their getaway.

If you have any information on Gifford’s whereabouts, or can identify the other two suspects in this video, an anonymous call to Crime Stoppers could make you up to $1,000 richer.

Today the Department bids farewell to a beloved, long-time employee. Cathye Schafer started her career with the Franklin Police Department as a Dispatcher in 1995, later transferring to the Department’s Records Unit.

Born and raised in Nashville, Cathye is a graduate of Hillsboro High School. Since then, she has also called Fairview and Lyles home. Cathye’s lifetime of public service includes time as a Reserve Police Officer with the Fairview Police Department, a First Responder with Fairview Fire, and a Dispatcher with both Fairview and Williamson County.

“Cathye’s tenure and contributions will not be forgotten,” said Chief Deborah Faulkner. “We’ll miss her and wish her all the best in this new chapter.”

Cathye says that she’ll enjoy more time with her husband Steve and her horse, Fancy — but will miss the people she’s worked with through the years.